Your digital catalog is on the way!

If you are interested in receiving our semiannual printed catalog, please provide us your mailing address information.

Carat is often the first thing to come to mind when thinking about a diamond’s size. Size and carat weight are closely related but there are other factors in a diamond’s appearance. Cut and shape also play a role in whether the diamond appears visually larger or smaller than its actual carat weight.

A properly cut diamond will not have too much weight in hidden areas. The added weight increases the cost without giving the diamond a larger appearance. At Kwiat, we cut our diamonds to keep the carat weight in the right places. Each gem has the widest possible diameter to appear larger than other diamonds of comparable carat weight. And because of their superior cut, our diamonds will appear whiter than their GIA color grade. We call this the Kwiat Tiara® Cut.

Check out Diamond 101 to learn more
Diamond Color and Clarity

Diamonds are rated on a color scale developed by the GIA, the world’s premier diamond grading nonprofit. The color grading system is based on the alphabet, beginning with the letter D and running all the way through Z. A grade of D is the best possible grade a diamond can receive, which translates to an absence of color. Diamonds with this grade tend to be the most rare and valuable.

Clarity refers to the presence of imperfections, known as inclusions, in the crystal structure of the diamond. Nearly all diamonds contain some sort of inclusion, as they are part of a diamond’s characteristics and structure. An inclusion within a diamond is natural, and on the higher end of the clarity scale, does not take away from its beauty.

Check out Diamond 101 to learn more

View and print out our handy guide, or submit your information and we’ll mail you a complimentary sizing gauge.

HOW CAN WE HELP?

We’re standing by to answer your questions.

ADDED TO BAG!
Please note, we are unable to reserve these pieces, so shop now to make them yours.
view shopping bag Proceed to Checkout
SAVE YOUR LIST
Enter your email and we’ll send you a list of the items in your shopping bag.

A Guide to Emerald Engagement Rings

An Introduction to Emeralds

The word “emerald” is derived from the Ancient Greek word for “green gem.” Its brilliant color, which ranges from a bright green to a bluish one, comes from its nature as a unique variety of the mineral beryl.

Emeralds were discovered in South America in the 16th century, but their history dates back far longer. In fact, the oldest emeralds, located in South Africa, are nearly 3 billion years old, and the first known emerald mines in Egypt date back to 330 BC. 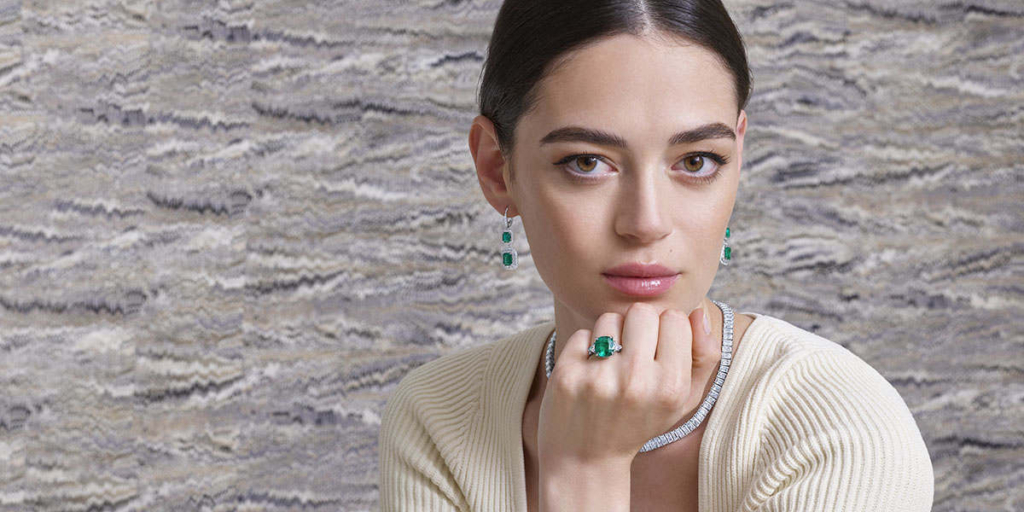 The most important aspect of emeralds is their color, which is defined by consistency, tone, and saturation. The most desirable emeralds are a pure, intense, and even green, or green with a bluish hint. They pair elegantly with many different kinds of metals, stones, and jewelry settings.

Traditionally, we know emeralds as the May birthstone and the gift for 55th wedding anniversaries. However, in recent years, more brides-to-be are choosing vibrantly colored stones for their engagement rings — and emeralds are one of their top choices.

An In-Depth Look at Emerald Gemstones

Among the four most popular gemstones (diamonds, rubies, emeralds, and sapphires), emeralds are the rarest — and often the most valuable. They naturally have visible inclusions, known as “jardin” (“garden” in French), which make them brittle and more susceptible to damage during the cutting, polishing, and setting process. An emerald without any such imperfections is likely synthetic.

Colombian emeralds are especially difficult to cut because of the way their color is distributed, often requiring extra care to bring out their intense hue. A well-done cut enhances the color’s richness. Highly skilled stone cutters, known as lapidaries, know how to cut emeralds strategically so that fractures do not appear at the stone’s surface or corners. They can even influence the stone’s color by changing the emerald’s number of facets and proportions.

Because of this, some cuts are better for enhancing the color of an emerald. For instance, a deep cut with a small table and fewer facets lets in less light, making the stone appear darker. A shallow cut with a large table and more facets, on the other hand, lets in more light so that the stone appears lighter. 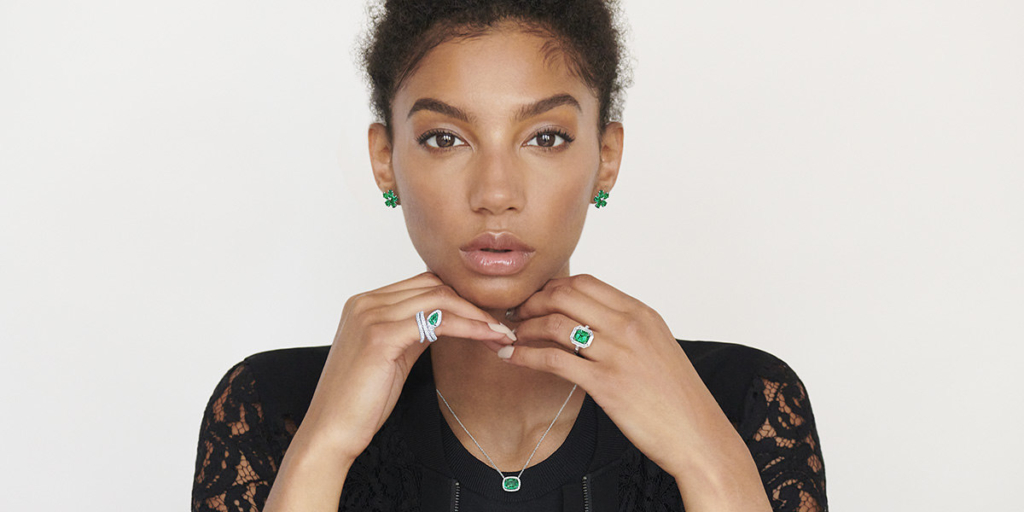 Though popular among diamonds and other gemstones, the emerald cut is named after the stone it’s most frequently used for. The shape — a step cut with long, rectangular facets—suits emeralds in particular because of the structure of their crystals. The faceted corners protect the stone’s corners, preserving the emerald’s integrity.

At Kwiat, we often fashion emeralds as emerald, oval, pear, and cushion shapes, all of which make ideal center stones in engagement rings, pendants, and earrings.

For those drawn to color, emerald is a one-of-kind way to embellish your ring finger. It is said to be emblematic of truth and love — the perfect symbol for a long-lasting marriage.

These rings vary widely in appearance, sometimes featuring diamonds or smaller emeralds as side stones, in a halo, or in a pavé setting. But on their own, emerald engagement rings also look exquisite with a classic and minimal solitaire setting.

With countless options to choose from, Kwiat also offers custom ring designs according to your specifications. Each ring is uniquely crafted, with minimal metal, delicate prongs, and refined bezels that don’t detract from the emerald’s elegance. The result is a striking and distinctive masterpiece.

We invite you to preview Kwiat diamond jewelry at a boutique near you. Let us know which pieces are of interest to you so they are available for your appointment.

We invite you to see this ring in person at the Kwiat Salons in New York or Las Vegas, or at a trusted retailer partner near you. Please let us know your availability and we’ll ensure the ring is available for you to view within 3-5 days.

Alternatively, you can search by zip code.